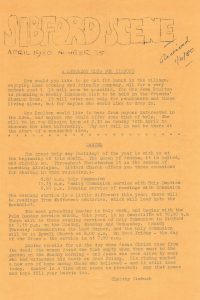 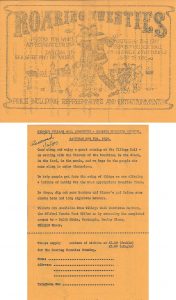 A luncheon club for Sibford

How would you like to go out for lunch in the village, enjoying home cooking and friendly company, all for a very modest cost? It will soon be possible, for Mrs Jean Poulton is planning a weekly luncheon club to be held in the Friends’ Mission Room. It will cater not only for pensioners and those living alone, but for anyone who would like to drop in.

Mrs Poulton would like to hear from anyone interested in the idea, and anyone who could offer some kind of help. She will be in the Mission Room at 2.30 on Monday 14th April to discuss the idea informally. Why not call in and be there at the start of a wonderful idea.

In 1924 a young girl came from Woodford Halse to work at the Friends’ School. This month, Rosemary Cottage will welcome new residents, and Mabel Dunkley will move to Bloxham to be nearer her son and his family.

The years between tell the story of a full life in which Mrs Dunkley has become well known to so many Sibfordians. In 1930 she married Bill Dunkley, a local man, who was gardener at lnnisfree, the white house at the end of Bonds End Lane, where now the Gordon family lives. Mrs Dunkley speaks with pride of the lawns and primrose walks that her husband tended; he won many gardening prizes in his time.

The couple went to live in the Friends’ Cottage, acting also as caretakers for the Meeting house. Part of their work was to look after the gardens and grounds, and in early summer each year they used to put in a special effort to have everything looking at its best for the GeneralMeeting, which was attended by many visitors, with vast refreshments out of doors. During the war, when evacuees occupied the Mission Room and had their school in the Meeting House they found themselves unexpectedly school caretakers as well.

Their son, Bill, was born, like his father before him, at Rosemary Cottage. And it is from the windows and welcoming door of that house that Mrs Dunkley has made friends with so many new villagers and their children. She has been an unofficial granny to many a small child whose own grandparents live far away. She has friends of every age in the village, some dating back to her girlhood, and is a firmly established member of the Friendship Club and worshipper at the Parish Church. In her younger and fitter days she was a member of all kinds of groups and committees.

Sibford will miss Mabel Dunkley, but she won’t be far away in Bloxham. We hope that she will meet with as much friendship there as she has given to so many in Sibford, and have many happy days living near her family.

A note from Mrs Dunkley

“A big thank you to all old and new friends for all their kindness to me. I shall miss you all, not forgetting the children.”