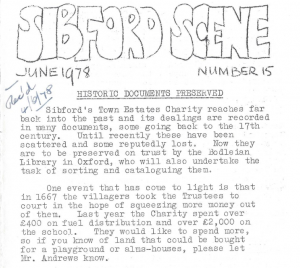 Sibford’s Town Estates Charity reaches far back into the past and its dealings are recorded in many documents, some going back to the 17th century. Until recently these have been scattered and some reputedly lost. Now they are to be preserved on trust by the Bodleian Library in Oxford, who will also undertake the task of sorting and cataloguing them.

One event that has come to light is that in 1667 the villagers took the Trustees to court in the hope of squeezing more money out of them. Last year the Charity spent over £400 on fuel distribution and over £2,000 on the school. They would like to spend more; so if you know of land that could be bought for a playground or alms-houses, please let Mr. Andrews know.

The annual parish meeting was held on 17th May and in his report the Chairman, Mr. David Soden, said that in the past year the Council had considered 22 planning applications and continued to support the local Bus Group though the proposed additional services were subject to a County Council subsidy still under consideration.

The provision of a bus shelter had again been considered but rejected on grounds of cost. Fifteen trees had been planted and it was hoped to continue a tree-planting scheme in the coming year. The Queen’s Silver Jubilee had been enjoyably and successfully celebrated and, in addition to the two seats, a sum of approximately £100 had been sent to the Prince of Wales’ Jubilee Fund.

Although unplaced last year, the village had again entered the Best Kept Village Competition and it was hoped that villagers would make a special effort to prepare for judging due in May/June and July/August.

The Council, aware of the need for a playing area for village children, have gratefully accepted the offer from the Primary School to use the field at the rear of the Infants School. It is planned to increase the amount of ‘adventure type’ equipment later this summer, but existing items are available for use by all village children. Mothers with younger children meeting schoolchildren may welcome this opportunity to avoid waiting near the highway. It is envisaged that a supervisory rota system will be needed during the school holidays.

Village footpaths had been cleared in the year by the council working party with valuable help from some villagers and children from Sibford School. The first outing for this year’s programme is arranged for Thursday, 8th June, meeting at the telephone kiosk by Wyatts Close at 7.30 p.m. – all helpers most welcome. The pond was also cleaned last year and it is hoped to do this again once the weather is a little warmer, later in June. Again – all helpers nest welcome.

It was agreed that matters of interest or importance arising from Parish Council meetings should be more fully reported using Sibford Scene and the Council would also welcome support from Local Government electors at their normal meetings. The next meeting – the A.G.M. – is on_Monday, 5th June at 7.30 p.m. in.the committee room of the Village Hall.