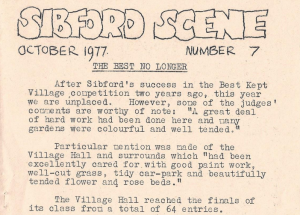 The best no longer

After Sibford’s success in the Best Kept Village competition two years ago, this year we are unplaced. However, some of the judges’ comments are worthy of note: “A great deal of hard work had been done here and many gardens were colourful and well tended.”

Particular mention was made of the Village Hall and surrounds which “had been excellently cared for with good paint work, well-cut grass, tidy car-park and beautifully tended flower and rose beds.”

The Village Hall reached the finals of its class from a total of 64 entries.

So, congratulations to all who are responsible for the care of the Hall; and perhaps a little more attention to detail from the rest of us might ensure that Sibford is among the winners again next year.

On Battle of Britain Sunday we had our own private aerial display.

The martins, having arrived later than usual this year, had nested in this area for the fifth year in succession to the great delight of the local residents.

Some of the old nests had been taken over by sparrows, who were well entrenched before the summer visitors arrived, and who refused to give way under the angry protestations hurled at then, so the martins simply built more accommodation. Easy when you know how.

Last Sunday, the young all now well and strongly on the wing, we had an unusual display of improbable aerobatics. A dozen or more martins were flying, wheeling, banking and nose-diving with such speed as to defeat the eye, and every minute or so swooping up to one house wall or other to circle, settle and take off again, twittering ceaselessly with animated intensity.

With their days in this country now numbered this could hardly have been a nesting flight. Could the birds be making their reservations for next year, albeit mental ones? And what a mentality! guiding them unerringly thousands of miles to the far south and back to the country of their origin, yet not only to the country but to the district, garden and very building of their nesting days.

The scientists and ornithologists may study and explain as they like concerning orientation by stars, but to me it will remain a miracle.

Above, we’ve copied out one or two items that may be of historical interest from this edition. To see the whole edition, click on the front-page image to download it as a pdf.

It will take a while, but we’re gradually building up this archive of complete copies of all editions of the Sibford Scene since its inception in 1977. Yet to be uploaded are editions between 1994 and 2015.