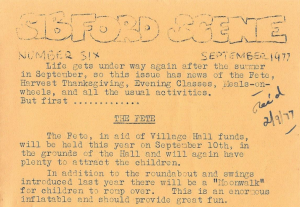 I remember ... a day in the life of a 7-year old Sibford lad

One summer‘s evening as the local Sibford families sat down to tea, a large Foden lorry loaded with bricks came up to the Cross and found it was destined for the Ferris and not the Gower. Turning round to retrace its journey, it left its mark of destruction. A spark from its engine sent the Thatched House at the Cross up in flames.

Not knowing anything about this my mother sent me from the Colony to Mr. Lamb’s house by the pool to get the weekly butter. Reaching the pool, I saw my friend, Fred Bishop, racing up the road with two milking buckets. When I asked him where he was going he said, “To the fire at the Cross.”

I raced to the door of Mr. Lamb’s house and collected the butter and off to the fire I went. Reaching my destination, I dumped the butter over the iron railings at Mr. Lydiatte’s, (now Mrs. Barton’s house).

Up the Colony hill comes the Hook Norton fire engine, drawn by horses, followed shortly after by the Banbury and Shipston Fire Brigades. The only water available was from the village pool and a reservoir below the Friends’ School. Unfortunately, the fire spread to the other side where Mr. R. Sabin lives, and great damage was done to all the property.

Childlike, I was still there at 9 o’clock when up comes Mother, asking where her butter was. My gracious me! I raced to the spot where I had dumped it and to my joy, in the little wicker basket was the home-made dairy butter, none the worse for fire and water!