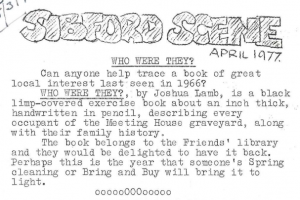 To the outside world Sibford is probably best known for its Quakers.

The story starts in 1657 when a Meeting House was built in Banbury after followers of George Fox brought Quakerism from the North. Many people from surrounding villages met there on Sundays, including Joseph Harris of Little Sibbard (Sibford Ferris), who almost certainly lived in what is now the Headmaster’s house at the Friends’ School.

It was with Joseph Harris that George Fox stayed in 1678 and held a meeting in a barn at Broad Sibbard on the last Sunday in March, at which many hundreds assembled.

Soon after this, Friends in Sibford built their first Meeting House, smaller than the present one, but on the same site. This served for some 200 years until, with the growth of the Friends’ School, it was found that a larger Meeting House was needed. The old one was pulled down and the present one opened in 1864.

Today, Friends in Sibford are a very small group working hard to stay alive. This year they have organised a calendar of events to help increase the fellowship. Concern for the elderly is shown in sharing in the running of a sheltered housing project at East House, Adderbury. The care of the young is also partly shared with Banbury where sone of the families go monthly for a children’s class; and on six Sundays Banbury Friends will come to join in the responsibility towards senior pupils from the school who attend several tines a term.

The Friends meet each Sunday at 11 a.m. in the Meeting House, Sibford Gower.