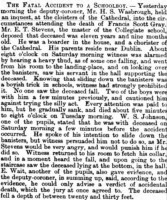 Tim Huckvale writes: If you attended (or Zoomed in on) my talk for the Sibfords History Society last month, you may be interested in what I found in a recent excursion down the rabbit hole of the British Newspaper Archive.

As I mentioned in the talk, the Reverend Edward Stevens was Headmaster of the Bristol Cathedral School for a few years before being ordained and becoming Vicar of Sibford. My research into the newspaper archive has now established that he was appointed Headmaster in January 1866, and left shortly before October 1870.

But I also had a surprise, in finding a newspaper article from 1867 which I have transcribed in its entirety below. Stevens’s own daughter Rosa was then aged 12 and his son Harry 8. It was less than a year later (while still Headmaster) that Stevens began his degree and religious studies at Worcester College, Oxford. Could the tragic event have influenced his change of career direction?

THE FATAL ACCIDENT TO A SCHOOLBOY. — Yesterday morning the deputy-coroner, Mr. H. S. Wasbrough, held an inquest, at the cloisters of the Cathedral, into the circumstances attending the death of Francis Scott Gray. Mr. E. T. Stevens, the master of the Collegiate school, deposed that deceased was eleven years and nine months old. He was a boarder in the house, and a chorister of the Cathedral. His parents reside near Dublin. About eight o’clock on Saturday morning witness was alarmed by hearing a heavy thud, as of some one falling, and went from his room to the landing-place, and on looking over the banisters, saw his servant in the hall supporting the deceased. Knowing that sliding down the banisters was a boyish trick in schools, witness had strongly prohibited it. No one saw the deceased fall. Two of the boys were with him a few minutes previously, and cautioned him against trying the silly act. Every attention was paid to him, but he gradually sank, and died about five minutes to eight o’clock on Tuesday morning. W. S. Johnson, one of the pupils, stated that he was with deceased Saturday morning a few minutes before the accident occurred. He spoke of his intention to slide down the banisters, but witness persuaded him not do so. Mr. Stevens would be very angry, and would punish him if he did so. Witness returned to his room to fetch his collar, and in a moment heard the fall, and upon going to the staircase saw the deceased lying at the bottom, in the hall. E. Wait, another of the pupils, also gave evidence, and the deputy-coroner, in summing up, said, according to the evidence, he could only advise a verdict of accidental death, which the jury at once agreed to. The deceased fell a depth of between twenty and thirty feet.

Newspaper image © The British Library Board. All rights reserved. With thanks to The British Newspaper Archive (www.britishnewspaperarchive.co.uk).