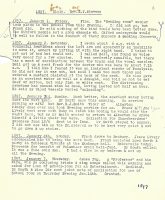 I awoke about 6 am with a wonderful heaviness about the left arm and apparently an inability to move it, except by lifting it with the right hand. I tried to get out of bed but could not. I called Bell, and found my voice very queer for a few minutes. I was perfectly sensible but there was a want of co-ordination between the brain and the vocal muscles. Bell got up and sent Frank for the doctor who was here by 7.15 am. I told him I feared it was an incipient stroke of paralysis. He did not say it was not, but said I made too much blood and ordered a mustard plaster at the back of the neck. He also gave me an aperient water as well as a draught and told me not to eat beef or mutton but only fish or white meat. The distressing symptoms had passed when he came, having lasted not half an hour. He said my blood vessels wanted “unloading”.