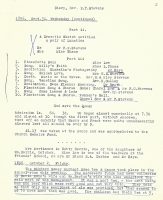 The Sibford Gower Harvest Home tea and dance took place in the School-room this evening. The necessary funds had been collected by David Hone’s wife and William Barton’s wife who also undertook the main part of the management. It was a meat tea, – the meat being ham and beef which were very good and cut very thin. They told me that only one small cask of ale was provided, but they seemed to me to have more than was good. The children had their tea at 5, the women at 5.30 the men at 6.30 but women and children for most part sat down at the same time.

At 8 o’clock, the men having finished their tea, the dancing commenced. The Sibford Brass Band gave their services. Between the dances one or two songs were sung and Frank recited in the most inimitable manner, “The Bishop and the Caterpillar”.

William Barnes, being somewhat the worse for drink and annoying the dancers, I went to him, took him by the arm and showed him out of the room, telling him that his proper place was outside. Mr Long, baker and postmaster, came in the worse for drink whereof Mr Oddie put me on my guard, saying that Long wanted to make a speech and was drunk. Long sat just behind my chair and every minute or two whispered some drunken observation in my ear. So at last I told him significantly that I had just put one drunken man out. I ordered the Band to stop the dance music at 12 sharp, which they did. John F. Inns asked me whether they might not have just one short “country” dance more. I said “No it is quite late enough. I have given the band orders to stop and cannot recall the order”. We sang a verse of the National Anthem. Joseph Alcock, Lewis Poulton and others indulged themselves for a few minutes in proposing votes of thanks to the Band, the Women, the Ladies, the Vicar, the Trustees etc but by 12.15 the lights were all out and the people going quietly home.