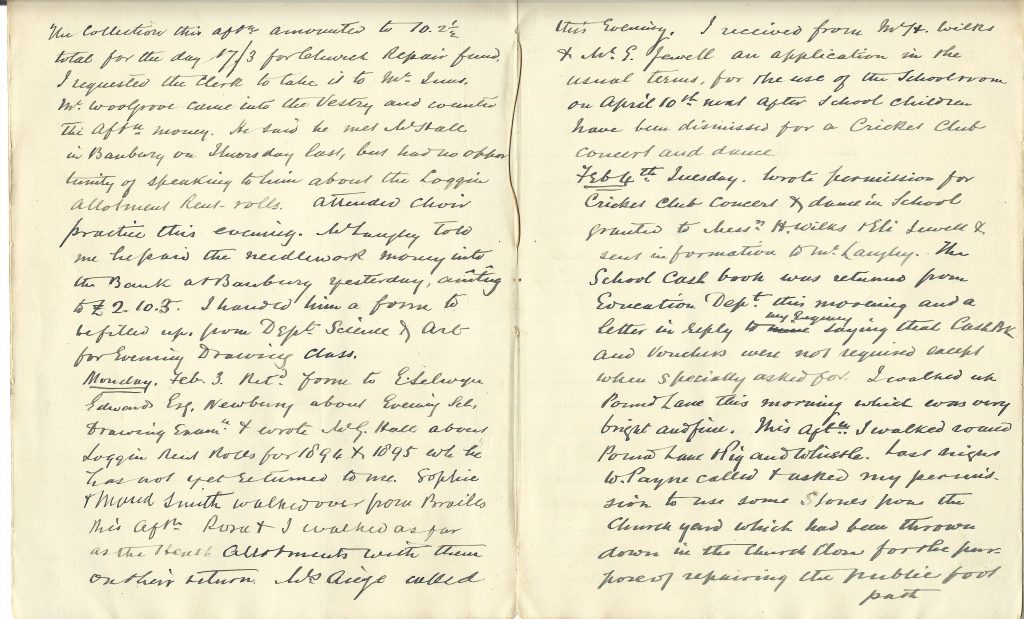 The School Cash Book was returned from Education Department this morning and a letter in reply to my enquiry saying that Cash Book and vouchers were not required except when specially asked for.

I walked up Pound Lane this morning which was very bright and fine. This afternoon I walked round Pound Lane and Pig & Whistle. Last night W. Payne called and asked my permission to use some stones from the churchyard which had been thrown down in the Church Close for the purpose of repairing the public footpath. Mr Mann (as Waywarden) had ordered him to do it, but to ask my permission to have the stones. I went to see them this afternoon and saw that they were “hand-picked” having as far as I could see no soil with them.

Mr George Hall sent me a note saying that Mr Miller promised to send me “The Rent Rolls for 1894-5.” He sent me those of the Town Estate on Saturday last. But what I want are those of the Loggin Estate for 1894-5 which I lent Mr Hall and which he appears to have lost.

The dancing class begins work in the schoolroom this evening. Rosa and I walked up. She went in. I did not. The dancing master, Mr Betts of Banbury, did not come out so Louie Thame taught the class as well as she could. There were 26 present besides Cluff, Inns and Jewell.