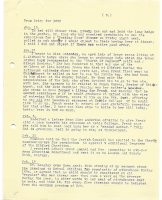 I wrote to Miss Anderdon, an aged lady of large means living at St Michael’s Lodge, where she keeps an orphanage into which she takes orphan boys recommended by the “Church of England Waifs and Strays Society”. She has received in that way one of the children of late Soldier Green who had died at Sibford during the influenza epidemic about two years ago. When Frank first went to Chislehurst he called on her to see the little boy, who had been in his class at Sunday School. He thus made the acquaintance of the lady who often invited him to go to tea etc with her. She appears to be related to Canon Murray, Rector of Chislehurst, and the late Cardinal Manning was her mother’s brother. She seems to have formed a liking for Frank, and knowing that he needed assistance if he would graduate at Oxford with the view of entering Holy Orders, wrote to him on the 8th inst. offering to pay all his necessary expenses at Keble College if he would like to go up. Frank wrote, by return of post, gratefully accepting her kind offer. I have not been able to write to her until today, having been in bed so much.