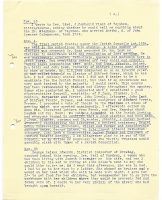 The first Parish Meeting under the Parish Councils Act, 1894, was held in the schoolroom this evening. A large number of electors was present. Mr Inns proposed Mr William Lamb as chairman, in accordance with the resolution of the last meeting. He was unanimously elected. Methodists, Quakers and Radicals were in great force. But everything passed off very quiet and orderly. Twelve legal nominations were made, and Inns, Abbotts, Spicer, Dan Sabin and John Lamb, formerly of Sibford Ferris were elected by show of hands. Mr R.H. Lamb nominated me on an invalid paper. He had called himself an Elector of Sibford Gower, which he was not. I had publicly stated that I did not desire to be a candidate for the Parish Council, but that if my assistance was very much desired by the majority I would serve. This course had been recommended by Bishops and Clergy throughout the country. No one else nominated me. I nominated what I considered a good representative Council, consisting of F. Inns, Plumber, L.T.Poulton, Carpenter and Farmer, John Lively, Labourer, John Lamb of Sibford Ferris, Farmer, and Joseph Woolgrove of Sibford Ferris, Farmer. I proposed a vote of thanks to the Chairman at close of the meeting which was carried unanimously.

No poll was demanded as the Parish Meeting and everyone seemed to consider that a good election had been made. F. Inns, plumber, postman and Churchwarden, Abbots, a Quaker Radical evidently representing the labourers, a retired tradesman, Daniel Sabin, Conservative Churchman, Miller and Farmer and considerable cottage owner, George Spicer, an intelligent Liberal Methodist labourer. John Lamb a Conservative Quaker Farmer and Chairman of Sibford Benefit Society. I am altogether glad to be out of the Council as my duties as Secretary to the Charity Trustees would possibly clash with those of a Parish Councillor.

I afterwards called on Miss Dix. (Received letters from Frank and Mrs Hemming about London and County Bank).