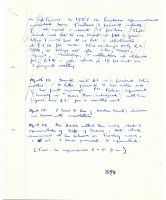 Mr Oddie called this evening about the examination of Department of Science and Art which commences at his school on Tuesday evening, and which I have promised to superintend.

From Notes at end of diary (after 1 May, Tuesday).

Soup for the poor. 6d. per lb. to make a gallon of excellent nutritious soup. “Economic soup and food Company, 52 Cheapside E.C.

Dec. 18, 1893. Cost about 1/4. The ingredients are reduced to powder, ignited and the smoke inhaled three or four times a day and in the night too when breathing was difficult. The prescription not to be given to any one in trade. Lobelia at herbalist’s.

For Rheumatism Salycilate of Soda. 10 to 15 drops (not more) in a wine-glass of water three or four times a day.