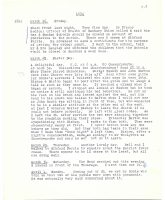 A delightful day. H.C. at 8 am. 20 Communicants: at noon 34. Collections for Churchwardens’ fund £2. 12. 4. Mary Thame played Harmonium. Walter Bishop and John Barton came into Church very late this afternon soon after some girls (Mr Oddie‘s servants I believe) who also came in very late. Bishop and Barton began to peer after the girls and to laugh and talk as soon as they came in. It reached a climax when I began my sermon. I stopped and looked at Bishop but he took no notice and still continued his bad behaviour. He put up his feet on the bench and leaned against the end, put his hand to his mouth and talked to Barton whom I could not see as John Routh was sitting in front of them, but who appeared to be in a similar attitude at the other end of the seat. At last I ordered Walter Bishop to leave the church if he could not behave properly. He left with great noise. As I left the Church after service the two were standing together by the roadside smoking their pipes. Evidently Barton was sympathizing with Bishop. I spoke to them both. They were excessively saucy at first. I never before knew any one behave as they did. But they both had tears in their eyes when I bade them “Good night” and left them. Bishop, after a night’s consideration, made an apology to Mr Woolgrove as Churchwarden and said he would not do it again.