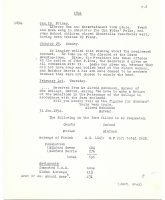 Library Tea and Entertainment took place. Frank and Rosa sang in character The Old Folks’ Polka, and some School children played Cinderella remarkably well, having been trained by Frank.

Lending Library.—The annual meeting of the members of this Society was held on Friday evening, January 19th. An excellent tea, to which some fifty or sixty adult members and children did ample justice, was provided by ladies of the committee. At seven o’clock, the business meeting was held, under the presidency of the Vicar, the Rev. E. T. Stevens, who gave brief report of the Society’s doings in the past year, mentioning that it was founded on Dec. 10th, 1877, and supplied its members with excellent, wholesome, and interesting reading for old and young ever since that date.—Miss Wells, of Sibford Gower, was elected a member of the committee, the old members having elected nem con. A vote of thanks was awarded to the ladies for supplying the tea, and to Mr. Frank Stevens for his useful services as librarian, and to the committee generally for their services. The balance sheet for 1893 was read, showing a total of 191 quarterly subscriptions during the year, amounting, with 2s. balance in hand, to £4 17s. 6d. The expenses for candles, repair of books, printing, &c., amounted to £1 14s. 3d., leaving a balance in the Sibford Penny Bank of £3 3s. 3d., which will be devoted to the purchase of new books soon as needed. The library has undergone an entire revision during the past year under the new librarian, moat of the books have received new numbers, catalogues have been issued, and the library is in a state of perfect order. An entertainment, free to all members, followed, and was much appreciated. There were very many encores—so many, indeed, that becomes an important question whether they should be allowed in future, though amateur performers, having got over their nervousness, often do themselves more justice after than before an “encore” is called. It would perhaps be invidious to praise the efforts of particular performers where all did their best and all did so well ; but we may perhaps be allowed to commend the children who, under the able training of Mr. Frank Stevens, so well acquitted themselves in the little comedy of “Cinderella,” which was prettily “dressed” and remarkably cleverly “put on.” The music of the piece was arranged by Miss Stevens, who admirably performed the task of training the singers.

The entertainment was most successful, and the room was full, though, as “Punch” says, “Jupiter Aquarius was out with his watering pot.” Before the close of the proceedings, the President proposed a vote of thanks to all those who had kindly and so well entertained them, which was received with great applause.