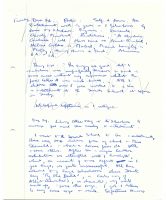 Library Committee Meeting at the schoolroom to arrange for annual tea meeting and entertainment.

Bell, Rosa, Frank and I went to Mr Oddie‘s, The Friends’ School to a tea and entertainment given by Mr Platt a Druggist’s traveller, a very pleasant and gentlemanly man, who has known Sibford for some twenty years or more, but who broke down with overwork a few weeks ago and is staying at Dr Routh’s for the benefit of his health. There were 104 children present from my School and Miss Shemeld’s, and about a dozen poor old folk and some others. After tea a Magic-lantern Exhibition was attempted with the Lime light, which however, on account of some defect in the gas bags, was quite unsuccessful. All then returned to the large Schoolroom where Frank sang “My Dear old Dutch”, a Coster Song of Albert Chevallier’s, in character very well made up, and some other songs. To wile away the time I got the children to sing some songs and recite. Septimus Harris and another or two also sang, at Mr Oddie’s request. The party broke up at about 9.30.