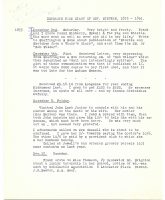 Visited John Lamb Junior to condole with him and his sister Annie on the death of his wife. Her mother (Mrs Barton) was there. I read & prayed with them, then took John outside and gave him 10/— to help him with his expenses, which must have been heavy. He was very much cut up , but seemed very grateful.

I afterwards called on Mrs Cassell who is about to be confined. I gave her 2/- towards paying the doctor’s 10/6. The other 1o/6 is paid by a provident club to which she and her husband belong.