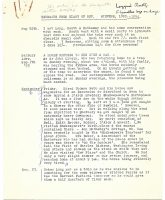 Hired Thomas Webb and his horse and wagonette for an Excursion to Stratford on Avon to show Roland and D’Arcy Braddell Shakespeare’s Birthplace etc. It was a fine day on the whole though rather cloudy at starting. We left at 9 am and got caught in a shower the other side of Newbold. However, it soon passed over. But in walking along the road from Stratford to Shottery we got caught by en extremely heavy downpour. We stood under some trees which kept us fairly dry. My party consisted of Bell, Edith Brooke, Roland, D’Arcy and myself. We visited Shakespeare’s birth-place and the museum contained there – Ann Hathaway’s Cottage, which has been recently bought by the “Shakespeare Trustees” for about £3000. Mrs Baker, a descendant of the Hathaways who has had charge of the place about 50 years was there to “do the honours”. She remembered well the visit of Charles Dickens, Washington Irving and others and showed us the stone on which they sat. We also visited “New Place” and the Church. We had only a very slight shower on our return journey, and reached home at about 9 pm the horse being evidently very tired.