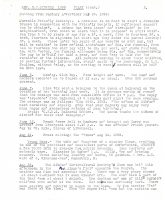 The Sibford Horticultural Society’s Show was held this afternoon in Mr Ainge’s field opposite the Church. The weather was fine but somewhat windy. There was a very sharp shower at about 2 o’clock but it soon cleared off. The wind blew a part of the tent down at about 5 o’clock. Mrs Hopkins and one of William Barnes’s children were under at the time. But no one was seriously hurt. There were poultry and rabbits in cages in the Show. My fox terrier, “Pat” was there at the time. When the cages fell down and the rabbits ran out, Pat ran in. A Punch and Judy show was engaged from Banbury on behalf of the Committee. The men were paid 25/- or 30/- and all they collected in the money box, which was screwed down and handed over to the Committee.

All the more respectable people of the neighbourhood were there as well as all the labourers of Sibford and their wives and children and a large number from the neighbourhood. I walked about a good deal with Mr Oddie. Dancing commenced at 10 pm, admission 6d. Mr Oddie and I did not leave until about 12.30, when the Band was still playing but people were beginning to disperse. Everything was extremely quiet and orderly. Only John Lines and Bill Messenger were so far as I heard or saw the worse for drink. Bill Messenger (“Brasher”) was the worst. He wanted to fight the door-keepers and the policeman because they said he was not fit to go into the dancing tent. Some potatoes grown from seed in My Garden got first prize as the 6 heaviest.

I called at Mrs Hopkins to see whether she was hurt. Her son John opened the door. He said she hadn’t come home. Sometime after I saw her. She was not hurt but her right arm was somewhat stiff. John came up to the dance the worse for drink. Mr Oddie said he saw him in the tent and heard his usual bad language. He has an impediment in his speech and said he had “drunkenup teetotal drink dismornin to shorten his life by tenty year”.

I got the first prize for apples and the third for selection of vegetables raised from Carter’s seeds.