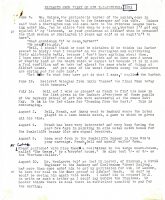 Mr Woolgrove told me that Mr Looker, of Bloxham, a Civil Engineer to the Banbury and Cheltenham direct Railway, had more than once asked to get my permission for him, Mr Looker, to bore for coal on the Race ground at Sibford Heath.. He said he would be seeing him again this week. I asked him to request Mr L. to write me such a letter as I could lay before the Trustees. Mr Looker thinks there is coal there in sufficient quantity to pay for the working.