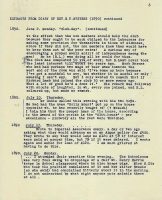 Mr. Oddie called this evening with his two boys. He had had the name “Holly Mount” put up on the house opposite which he has recently bought of (?Wrench). I told him that the proper name of the house, according to the Award of the parish, is the “Slathouse” – par excellence – probably all the rest were thatched.