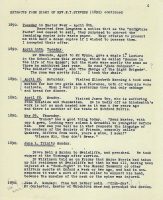 Drove Bell and Burdon to Swalcliffe, and preached. We took supper at the Vicarage after the service.

Dr. Wilkinson told me on Friday that Major Norris had taken up his residence at Swalcliffe but that he was ill, having been injured at a “Cock-fight” in the Hussar Yeomanry or other military sports at Oxford a week or two ago, and had in consequence to wear a sort of iron collar to support his head, because the muscles of the neck or spine were injured.