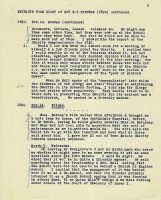 On leaving Mr. Woolgrove’s I met Mr. Richard Lamb who asked me whether he might come to me some evening to ask me some questions about the Town Estate. I said he might. He added that it would be in quite a friendly manner. He said something about the Trusteeship and George Hall, adding that the School here did not used to be called a Church of England School. I replied that the management of it was handed over to me as a Church School, and that its founder probably intended it as a Church School seeing that it was founded in either Edward VI or Queen Elizabeth’s reign and we were working under orders of the Court of Chancery of James I.