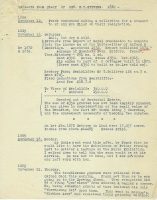 The troublesome gipsies were released from Oxford Gaol this morning. Frank met them as he was going in to the Drawing Class. They recognised him as young “gen’elman” from Sibford and begged a copper. He, being somewhat afraid of them bestowed his only “threepenny bit” upon them. They went to Gaydon’s “Wickham Arms” and reclaimed their grinding machine.

will deliver
a lecture on his recent

VISIT TO PARIS and the PARIS EXHIBITION