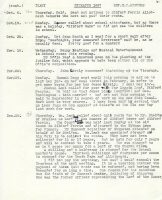 Hannah Legg sent early this morning to ask me to lend her 10/- on her coal ticket in February, in order to get some boots for her boy Jesse Lively. I sent her 10/-.

Joshua Lamb called for poor rate for Loggin Land, Sibford Ferris. He told me that James Lines (soldier) and George Buckingham – both married – had set out this morning to walk to Manchester in search of work on the new Ship Canal. Work here is very scarce. I have been told by several that no less than 43 men applied at Coles’s at the Elm one day last week for work.