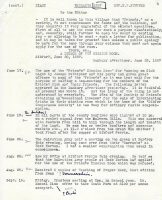 The use of the “Friends’ Mission Room” for dancing on Club night by Joseph Pettipher and his party has given great offence to many of the “Friends” as it was lent only for the purpose of holding a tea-meeting for the members of the Cricket Club and their friends. The following letter appeared in the Banbury Advertiser yesterday; it is not known at present who wrote it. But the irony of the thing is not understood by everybody. The idea of the Society of Friends obtaining an “occasional licence” for the sale of intoxicating drinks in their mission room which is the home of the “Sibford Temperance Society”, is too deep for ordinary rustic comprehension.

Sir,—Your interesting and well-put-together account of the Sibford Club, on Monday week, was rather incomplete inasmuch as it left out one of the chief features of the day (or rather the evening), which should have included a most enjoyable dance to the accompaniment of a portion of the music of the Sibford Brass Band in the Friends’ Mission Room, kept up to the “proper” hour of twelve. Those who took part in this pastime wish most heartily to thank the Friends for so kindly placing the room at the dancers’ disposal, as it “aired” the room as well as those who danced; and we hope on the next occasion they will see their way to apply for an occasional licence ; that so, both the actors and onlookers may have an opportunity of being refreshed thereby, which would without reasonable doubt be granted to this orderly body of the community, and should have been this year, considering the Jubilee.

A further cutting, from the Banbury Advertiser of 23 June 1887

Sir,—In your last issue you published an unwarrantable letter respecting the Society of Friends at Sibford which was signed “A Time to Dance,” in which the said society was sarcastically thanked for the loan of their Mission Room for the purpose of dance ; at the same time intimating that seeing the society had made this innovation in their creed, they hoped that on the next occasion they would apply for an “occasional licence” “that so both the actors and onlookers may have an opportunity of being refreshed thereby.”

Now the facts of the case are these : the Sibford Cricket Club having decided to play match on the afternoon of the club day, a prominent member of their committee applied to one of our number for the use of the mission room in the evening, stating that they wished to have a tea there, and that probably they might like to finish up the day with a little singing and music ; no mention whatever being made of the intended dance ; the application was acceded to, and the event terminated as reported in your correspondent’s letter. A few remarks which it was thought needful make afterwards to that prominent member of the cricket committee on their breach of trust was not well received, and retaliation seems have been attempted through your columns the writer of the letter referred to. It is well known in this village that “Friends,” as a society, do not countenance the dance and the ball room, and they consider it very ungrateful of the cricket committee, first of all use the room for such purpose clandestinely ; and, secondly, still further to open the wound by sending you—or allowing to be sent—such a letter for publication, and it may be taken for granted that unless a public apology be made for the same through your columns they need not again apply for the use the room.