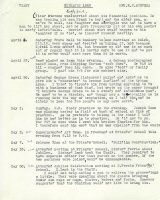 George Green (labourer) called and asked me to give him a “character” to become landlord of the Wykham Arms. I tried to dissuade him from having anything to do with a business of that kind, but wrote on the paper brought “I believe George Green to be a steady and industrious man”. He used to be a tippler, and though now a teetotaller he is running into the way of temptation, as I told him, and is likely to lose the few pounds he may have saved.