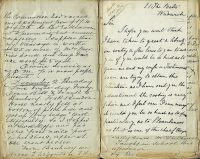 Fine bright day. Frosty. Drove Bell and Frank to Banbury. Took Burdon. Horse nearly fell at bottom of Pitch Hill and got up “Long hedge” with difficulty. So I stopped at Swalcliffe and had some “frost nails” put in her shoes, after which she went better.

From Banbury we drove to Wigginton to the re-opening of the church after restoration. We were too late for the commencement of the service, though we were not much behind, about 2.35 instead of 2.30. The Bishop of Oxford preached. He is beginning to look very old – but his voice is firm. We had tea in schoolroom afterwards, and then returned home, not caring to stay for the evening service owing to the cold and the slippery condition of the roads.

There has been a heavy snow storm in North Wales and Scotland.

PS please send it to me as I may send it in with my application.

I replied to the effect that I was sorry to learn, and to know that they had given way to intemperance at Swalcliffe, and said that if they would “sign the pledge” which I sent them I would write a favourable testimonial. I have not yet (Dec 30) received any reply.