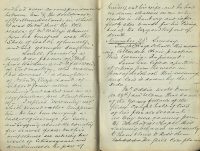 Some one lifted a portion of coping from the wall in front of the school this evening and laid it down by the side.

Mr Oddie wrote to me (on 29th) and told me that some of the young fellows of te place caught hold of two of his female servants as they were coming from the Methodist Chapel this evening, behaved indecently to them and tried to kiss them. The girls complained to Mrs Oddie and she and her husband are very indignant about it. I told Mr Oddie that before he printed handbills as he proposed, offering a reward for the names of the ill-doers, he had better communicate with the police and endeavour to ascertain whether the girls had give the youths any encouragement. I told him moreover that if one of the girls had been brought up to the church he would be quite justified in not allowing her to go out to the Methodist Chapel on Sunday evening, for that great mischief often resulted from such going out at night. If they wished to be out at night and he desired, he should let them accompany him and his family to their meeting.

On enquiry some two or three weeks afterwards he told me that the tale was a “trumped up one” to a great extent, for that the girls now confessed there was no indecency and one of them at least had sent “her love” to John Lamb, whom she had never spoken to at all. Mr Oddie said of course that the matter was allowed to drop with a caution to the girls.