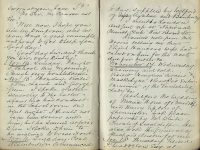 Visited J. Waddelow Esq. at North London College, Greville Road, Kilburn. The place will not, I think, suit me, though the neighbourhood appears to be a good one for a school of superior class. The lease, a Repairing one, has only 3 or 4 years to run, and a great deal requires to be done. A stable and man’s rooms adjoining the house are occupied and the clothes were hung in front to dry which was very detrimental to the appearance of the place.

Visited Aunt Emma at 4 Clephane Road. Mr W. was at home. She opened the door to me, a Mrs Lines, a friend of theirs was there – and Mr and Mrs Aird, rather big, talking people came in the evening. He is the son of a late eminent engineer of that name, but seems devoid of eminence in any line, except that of idleness and extravagance.

Cutting from Banbury Advertiser of 18 November 1886, pasted into diary

A FARMER’S QUARREL.—Thomas Cole, farmer, Sibford, was charged with assaulting William Austin Gardner, at Sibford, on November 1st.-—Mr. H. F. Bennett for complainant, and Mr. W. L. Whitehorn for defendant —William Austin Gardner, farmer, Sibford Ferris, said: On November 1st I got home a little after four in the afternoon. I tied my horse against a hayrick, on my own premises ; defendant’s field adjoins mine. I went indoors and returned about ten minutes. I saw defendant coming, leading my horse, by a broken halter. I opened the gate to meet defendant, and he said he was not going to have my horse in his field. He was in a dreadful temper and had a large hammer in his hand, used for driving nails into gate. He swung it about my head, and said he would knock my brains out with it, I did not threaten defendant in any way, but told him he was a coward for trying strike me with hammer, and that he could hit me if he liked. He had broken the halter, and he got over the wall into my held.—Cross-examined by Mr. Whitehorn : I was brought up last week on a warrant and bound over to keep the peace on account of what happened on the 4th inst. This assault took place on the 1st November. I had been to the hunt breakfast at Heythrop. I did not call at Great Tew on my return, and have some drink. I was as sober when I got home as I am now. My colts have not frequently been in defendant’s field this year. I opened the gate, and went quietly towards defendant ; he did not hold his arm to keep me off. He came at me like a madman. The handle of the hammer was about a foot long ; defendant could have hit me if liked. He threatened to knock my brains out. I did not throw a stone at him.—Mr. Whitehorn said it should be observed that the summons arose out of a case that was heard before the Bench on the previous Thursday, when Mr. Gardner was bound over to keep the peace. His client found he could not live in peace and quietness and was obliged to send for the police and take proceedings. He should call no witnesses for the defence, but leave the case in the hands the Bench to say whether the fact of complainant’s horses trespassing in defendant’s field was not a grievance.— The Chairman said it was the unanimous opinion of the Bench that the charge had not been made out, therefore the case must be dismissed.