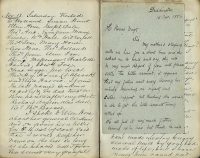 I spoke to Ellen Hone about her general conduct, and on giving her a ticket for 4cwt of coal said that I would keep her name on the list so long as she behaved well, and she seemed very grateful for it. The man who “lodged” with her for some time is gone.

“I am sorry to hear that you sometimes use very bad language. How is that?”

“But you know it is very wrong, not only in itself, but because you set such a bad example to your own boys, and Our Saviour said “for every idle word that man shall speak, he shall give account at the day of judgement.”

“That is no excuse for using bad language. You have made me very angry several times by your bad mode of life, but I have never been round and sworn at you, have I?”

“Well now, I hope you will try to improve and set your boys a good example, and pray to God to help you. Good day.”

Letter from David Hancox to Henry Norris pasted into diary

My mother’s staying with me here for a short time and she asked me to write and say, she will be very much obliged if you will please settle the butter account, it appears that my father went away leaving her entirely depending on myself and sisters support but thinking she would be able to get the little accounts owing settled up.

We all feel it very much father leaving as he has, but think he will pay all his debts when he is able to do so. Hoping you will excuse my taking the great liberty of writing

I do not know whether Mrs Hancox called on you yesterday. She came here bringing this. I simply told her that I was very sorry for her but that I felt that the Sibford Charity had suffered so from her husband that the Feoffees were entitled to every shilling they could get and so I had paid what was owing to you as Treasurer. I confess I am sorry for the woman if what she says is true, that she knew nothing of his intention to bolt or that he had sold the things he did.