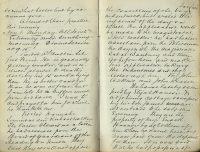 Visited Richard Austin, Sibford Ferris. he is gradually getting weaker, and is reduced almost to death’s door, by his 15 weeks lying there. He is better cared for than he was at first, but I am told he suffers much from bed sores. I read to and prayed for him for which he thanked me.

Visited Hannah Simmons and Richard Walker. The latter shewed me a letter he had received from the Board of Governors of the Headington Union. They said they would not oppose the cancelling of the boy Jarvis’s indentures, but wished to be informed of the day on which the application would be made to the magistrates. I told Walker he had better ascertain from the Policeman the day on which the magistrates sat at Banbury and then go before them and make his application taking the indentures and the letter with him. Visited John Adkins and John Reason.

The house lately occupied by Elijah Hancox and adjoining cottage occupied by his son James are advertised to be sold this evening. They are the property of Miss Enock. Hancox bought them of her when he came here, but never paid even the deposit for them. It is now said that he had possession of the deeds and obtained another mortgage on them.

I wrote to Miss Dix and Mr Henry Norris asking them to pay me on behalf of the Charity and moneys due to Hancox from them. I would give a receipt undertaking on part of the Trustees to refund the amount at any time if Hancox should claim it. It s reported that he and his son have arrived at New York.