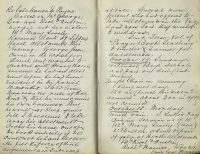 Elijah Hancox and his son James, with wife and family are gone off having cleared out everything – selling their furniture in the market place at Banbury. They have paid no one it seems, either for rent, bread, meat, boots, clothes, rates etc for some time. They are said to have sailed for America. Mrs Hancox senior is staying with one of her daughters.

Mr Woolgrove told me that Mrs Shelswell, wanting a servant boy who could live at home – and James Hone, bastard of Elizabeth Holland, being handy in more ways than one, and desirous to come, wrote a note to Mr Mann where the boy has been working some time asking whether he could spare him. Mr Mann replied that if Mrs Shelswell took the boy James she might have the father and the other boy too. Mrs Shelswell was much hurt at receiving so un-neighbourly a reply.