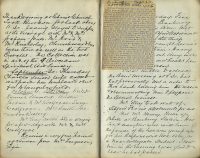 Cutting from Banbury Advertiser of 30 September 1886

HARVEST THANKSGIVING SERVICES were held in the church here on Sunday last, commencing with a celebration of the Holy Communion at eight a.m., and followed by the usual morning service at 10.30, and a second celebration of the Holy Communion at noon. The afternoon service was held at three o’clock. Appropriate sermons were preached to large and attentive congregations by the vicar, the Rev. Edward T. Stevens. There was also a special evening service at seven o’clock when an excellent and practical sermon on “The Earth is the Lord’s, and the fulness thereof” was preached to crowded congregation by the Rev. C. E. Graham-Jones, vicar of South Banbury. The church had been exceedingly well decorated by several ladies of the congregation with corn, flowers, and fruit, supplied by the inhabitants of Sibford Gower and Sibford Ferris, who seemed to vie with each other who should send the best, and a handsome “big loaf” was added by a local baker. The illumination of the church at night with Silber lamps and a multitude of candles was very effective, and gave great pleasure to the villagers, many of whom stayed long after the service was over to admire the beauty of the floral designs and other decorations, which showed well under the blaze of light. The collections amounted to £6 9s. 6d., and will be divided as usual between the Horton Infirmary at Banbury and the Radcliffe at Oxford, to both which excellent institutions the parish owes a great debt of gratitude, though it has not had occasion during the year to send patients to either.