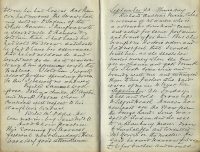 Dull and cold. Drove up to Sibford Heath. Hancox has removed all th estraw from the Furze Land. Some was sold to Soden, and the rest to a Banbury man. Drove to Swalcliffe and consulted Mr Norris on the matter. He said he owed Hancox £5 or £6 for butter and would see if he could not retain it for the charity on account of removal of straw contrary to agreement.

Visited Richard Walker, blacksmith, about the boy Jarvis who tells me that Walker refused to teach him his trade and sent him out to work for Ainge and took his wages. Walker and his wife charge the boy with an indecent assault on their little girl aged 3 or 4. I said Walker would have to account to the Guardians of Headington Union who had paid him £12 premium with the boy. I informed him that I felt it my duty to write to the Guardians about the boy, but would give them a few days to consider the matter themselves and they should come and let me know if they altered their present determination of not having the boy in the business.