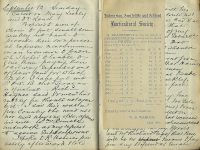 Proposed to men of choir to put small sum weekly into bank to provide their own personal expenses next summer on an excursion to London which I hoped to be able to give them, paying their railway expenses out of choir fund for which the £1 I have put into P.O.S.B. should serve as a nucleus. Richard Haynes said somewhat rudely he should not agree to it. I said this was a free country and he need not nor need anyone else, against his will. William Rimell undertook at my request to receive subscriptions.

I spoke to R. Haines privately afterward and told him I knew that with his large family he could not have much to spare and that I had thought of that before speaking of my plan for a choir excursion and that I would see that what was needed should be provided for him.

I afterwards learnt from William Rimell that Haines set all the other men against the proposal to save a trifling sum weekly, so that my plan fell through.