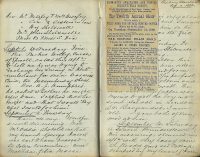 …he was in the habit of having intercourse with Matilda, daughter of Mark Barnes…

Cutting from Banbury Advertiser of 2 September 1886

TADMARTON, SWALCLIFFE, AND SIBFORD HORTICULTURAL SOCIETY.
(Under the patronage of the Clergy, Gentry, and principal inhabitants of the three parishes.)

The Twelfth Annual Show
Will be held in a FIELD NEAR THE CHURCH, SIBFORD GOWER
(Kindly lent by Mr. Ainge),
On Tuesday, September 14, 1886.

The Flower Show Prizes will be given away in the afternoon by Mrs. Stevens.

THE SIBFORD BRASS BAND
Will play for DANCING during the Afternoon.

Will be held, for which Prizes will be given. Among the Events will be the following Stone-Picking Race, 100 Yards. Hurdle-Setting Competition. Obstacle Race. Three-Legged Race, for Boys. 100 Yards’ Flat Race, for Women ; &c., &c.

Prizes will be given by Miss Norris for COTTAGE WALLS in Classes A and B. Entries to close Sept. 7.

Refreshments will be provided by the Sibford Temperance Society.

Entries for the Flower Show close on Friday, Sept. 10th.