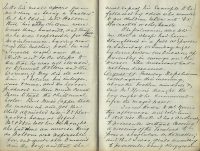 The policeman called again this morning about the broken windows and said Mr Norris thought the boy ought to be summoned before the magistrates.

I went down to Mr Norris this afternoon and told him I did not think I had authority to prosecute without calling a meeting of the Trustees to pass a resolution on the matter; and that I was quite unwilling to prosecute, being clergyman of the parish, if the matter could be settled without it.

He showed me a printed account of the Vicarage of Swalcliffe and its income, from which it appears that the Vicar is liable for a payment of £20 a year to the Vicar of Sibford, and that the whole net income of the Benefice, if all rents are paid, is only £147 but that the College allows £150 a year for payment of a Curate or Curates for Epwell and Shutford.

Henry Bishop called this evening about the windows broken in the Schoolroom. He said he thought his boy was guilty but that the policeman had not sufficient evidence to prove it. However he said he would pay the bill, 5/- for repairing the windows and would send the boy to me that I might have the opportunity of speaking to him about the matter.