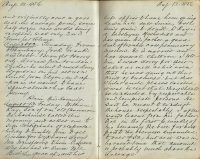 William Kay, son of an old choirman the machinist, called this morning and asked me to sign certificate of respectability to enable him to get license for Wykham Arms Inn transferred to him. C. Jeaves who has had it since Mrs Bishop gave up, and his wife appear to have been going downhill ever since, both being given to drink. W. Kay is a Wesleyan Methodist and has given his father a good deal of trouble over pecuniary matters. He is married and has several children. I told him I was sorry for their sakes as well as his own that he was going into that kind of business: but that whilst such places existed it was better that they should be conducted by respectable and temperate persons. He said he meant to conduct the house respectably. I afterwards learnt from his father that in the first 6 weeks of his tenancy the bill for beer paid to the brewers amounted to over £50, but as it was in harvest time that amount is probably much above the average.

It was so wet when they started that I did not feel justified in going though my carriage was at the door.

I called on Miss Dix before the others returned; and they told me afterwards that they had not had much rain at Edge Hill.