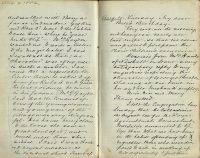 Very wet all the morning, and heavy rain nearly all last night, so that we were compelled to postpone the choir children’s excursion.

Received from Mrs Hands of Newbold on Stour a very satisfactory reply to my enquiries respecting the character of George Burdon who was at one time in her and her husband’s employ.

I told the congregation last Sunday that the Collections on August 1st for the Royal Agricultural Benevolent Institution amounted to 5/- less than what we had been in the habit of sending up and requested those who were disposed to aid in making up this deficiency to put their offerings for the purpose in the alms box. I was about to go up to church to open the box this evening when Miss Dix came in. She had previously offered me 2/6 to make up the deficiency, but I replied that I did not wish to “put too much on a willing horse” – not that I meant to describe her as a horse by any means, but she is if anything too kind and liberal, and I thought it better to ask the congregation to make up the sum. This evening she asked me how much there was in the box. I replied that I did not know as I was only then going up to open the box. “I am afraid you will not find enough there,” she replied. So I said I would call at her house and let her know on my return from the church. I found 6/- in the box; and when I called, finding her and her sister Maria with Mary Bessie and Daisy Thame I gave them a mental calculation to perform – which amused them greatly – in fact they laughed so much that I had to repeat my question several times before I could get the correct answer.

“There were in the box,” said I, as rapidly as I could get the words out, “two halfpennies, five pennies, four three-pennies, three sixpences and three shillings.” At last I got the correct answer, and they were all much pleased and a little surprised that there was so much. When Miss Sarah Dix came in, the question had to be repeated with a repetition of the amusement it caused.

See 18 August for a cutting from the Banbury Guardian about the August 1st collections.