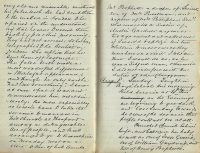 Taught in Boys’ School this morning. held service at 6 pm as the evenings are beginning to get dark, and last Sunday towards the close of the service the people could not see at all.

Churched Daniel Sabin’s wife, and baptized her baby as well as one of Jesse Green’s, one of William Gaydon’s, and two of Henry Prophett’s.

Last evening two children aged 5 and 3 respectively, named Ball, belonging to a daughter of Anna Aris, married to a policeman in London, and who are here for a few days’ change wandered away and were lost. The mother, grandmother, and many neighbours were out all night looking for them. A boy of John Lively’s and Francis Lamb found them at Hook Norton in the care of the policeman this morning. They had wandered as far as “The Gate Hangs High” or near it and had lain down on the roadside grass to sleep. They did not awake till 4 am, when they wandered on and were found by someone who took them to the policeman. The night was fortunately not very cold, and there was no rain, so they suffered no harm.

After church this evening Dr Routh introduced me to a lady patient of his who is lodging at Mts Turner’s. She is Miss Buller, daughter of Colonel Buller of Cheltenham, and related to the late Sir Redvers Buller and a niece of Lord St John. She is somewhat mentally afflicted, having a fancy for washing everything she comes near and cutting up into little pieces any dress which she thinks not fine enough for her to wear. She has a companion with her, a lady who has been a governess in the High School, Leeds, and who is going to Girton College Cambridge in the Autumn.

I accompanied Routh to his house – Mr Oddie joined us. In reply to my enquiries the latter told me particulars of the misconduct of the boys Jarvis, Shirley and Robinson with a woman over 20 years of age, named Harvey, who came to the Doctor’s one evening a few weeks ago for some medicine and enticed these boys to go with her towards Shutford.

These three boys had intercourse with her by the roadside not once but twice. Shirley who worked at the Friends’ School instantly confessed when Oddie accused him, and was sacked. He is ashamed of his sin. But Jarvis has no shame, nor does Robinson.

Jarvis comes from the workhouse school at Oxford. Robinson’s mother has been a very bad living woman, and if report is to be trusted, is so still. Shirley and Jarvis are in our church choir but will not be taken to Edgehill.

I have known for a week or two that some misconduct was alleged against these boys, but could not get particulars till this evening, as Mr Oddie was away for his holiday. he also told me that he had to discharge their cook, a very good servant, a young woman 22 or 23 years of age from Tysoe for using lingua obscoenâ to Jane Payne. The latter told Louisa Lines who told Maria Payne and her sister. They told Mr Oddie, who went promptly and wisely into the matter, and sent her out of the house within 20 minutes, packing her off to her own house at Tysoe. Routh told me that the girl Eliza Simmons who died at the lying-in hospital in London declared to him that John Truss of  Swalcliffe was the father of her child.

He also told me that Rose Newton (man?), of Galley Hill had given birth to a child which had died. She declared to him that Richard Gaydon was the father and that no other man had ever touched her.

I visited Anna Aris to enquire about the children that had been lost. The old woman said they were happy as soon as they saw a policeman’s uniform.