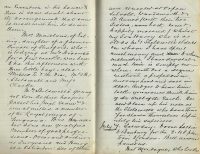 Drove Lottie to Banbury for the 2.48 pm train to London. Bell accompanied us.

Met Montagu, who looked very old and miserable without his false teeth. He had sent them to the makers in London to be repaired on the understanding that he was to receive them back by post this morning. They had not arrived: so he has telegraphed to the dentist in London who replies that he sent them off last night. The false teeth make a most wonderful difference in Montagu’s appearance, and though he only said he “had lost something,” I saw at once what it was, and commiserated him most sincerely, the more especially as he will have to take the services tomorrow in his church at Thenford among a disagreeable set of people, and has arranged to go to Devonshire on Monday next on a visit to one of his aunts.

Mr Prophett, a draper of Leicester, son of Mrs Priestman, and nephew of Mrs Pettipher senior who married a sister of Austin Gardner a year or two ago calle and asked me if I would baptize his two children tomorrow, as they were here on a visit. I told him that I would do so, as he was a Sibford man, otherwise I did not interfere with the duties of other clergymen.