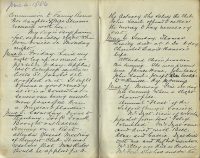 Fine all day till evening when a slight shower fell.

Mr Izat, Vicar of Wroxton preached from text “Felix trembled.” Mrs Izat came and dined with Bell, Rosa and Cassie. Izat dined with me and the Club members. Mr Elley was there as Auditor. Mr Fox who has audited the accounts for many years was not there. Mr Woolgrove, Mr D, Sabin, Mr Thomas Hitchcox and Mr James Rimell were present as honorary subscribers.

Benjamin Messenger Junior and John Lines, Carrier, were drunk early in the day; the former got a fall which cut his head. The latter was troublesome after the dinner so that W. Kay the President ordered the Stewards to put him out of the room which they, gathering round him, prepared to do. But he, seeing that resistance was of no avail walked out quietly.

Our Brass Band played “The Heavens are telling” as a voluntary in Church before service. They also played the National Anthem, the people singing the verse in alternation with the music of the band. I had printed the words including “Confound their politics” and distributed copies about the Church. Everyone sang, and the effect was very good indeed. Mr Izat remarked what a pleasant thing it was to see so many of the villagers present at the service. It appears that no one attends at Wroxton except the members  of the Club and they are few in number.

We gave the members and their wives etc tea and coffee, cake etc on my lawn, where they talked or danced whilst the Band played.

Last year Dr Routh collected money, to which I subscribed ten shillings, and gave a tea to members and their wives, by ticket, in the schoolroom, whilst the band played in Mr Ainge’s field where those who were disposed “tripp’d the light fantastic toe.” Somehow, not explained, Mr Routh declined to undertake the task this year, so a partial return to the old custom of parading the village was resorted to. After playing on my lawn, the Band visited only Mr Woolgrove and Mr Oddie and finished at Mrs Hiorns’s where they played to nimble feet till 8 o’clock when they went to supper. I went out at 10.30 pm and found everything quiet.

Mr and Mrs Dan Shelswell were here to tea on the lawn.