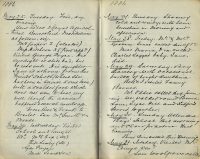 Sam Woolgrove called about the arrangements for Club day. Sibford Brass Band is engaged at £2.10 and dinner. To escort clergy from Vicarage lawn after dinner, then go to Mr Woolgrove’s and thence to Mrs Hiorns’s where they can play and people can dance till supper time.

I went out for a short walk before going to bed and fell over shafts of two carts full of stones which were backed against the bank at Gaydon’s Farm house, with the shafts stretching across the road. It was very dark, so that I could not see them. My left knee was abraded and bruised and my right shin also, the latter rather severely. John Adkins of Sibford Ferris is contractor for the works going on – but he told me it was Gaydon, the tenant, who was responsible for the carts being left where they were. I took the first opportunity I could get of speaking to Adkins, and mentioned the matter to Richard Gaydon.