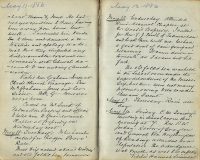 C. M. Society’s meeting in Schoolroom this evening at 7. Rev P. W. Jordan, Rector of Drayton and General Von Heythingsen of Reading attended as a deputation. The attendance was small, as was to be expected.

It was discovered that she was enceinte; the old woman saya by one of the Farm pupils – the girl appears to have said it was by one of the farm labourers. Misses Norris and Canon Payne sent the girl, at her own request, to a home in London with the object of letting her be confined there, removing her from bad associates, and giving her an opportunity of regaining her character. In order to accomplish their purposes they refused to let her relations know the address of the place to which they took her. The old woman went down to Swalcliffe the morning the girl left and created a scene. The aunts in London wrote somewhat violent letters to Canon Payne and Miss Norris – suggesting that they were keeping her out of the way for improper purposes and threatening to apply to the Home office and get an officer sent down to Swalcliffe to enquire into the matter if her whereabouts was not made known to them. Miss M. Norris, who was in London, saw the aunts and took them to the Home where the girl was, and it was arranged that they should be allowed to visit her once a week or so – they reported that the girl was well cared for etc but the friends in Swalcliffe and Sibford Ferris wanted her here in order that they might have the spending of her little savings and send her to the workhouse when her money was all gone. The old woman was very angry about it and asked me to make enquiries of Canon Payne for her, so that she might know the truth or falsehood of what she had heard. I did not see Canon Payne for some time, but called on Mr White the Curate on Sunday afterwards and ascertained that the main facts above stated were quite correct. I afterwards saw Canon Payne standing at his gate, on Saturday June 5, , as I was driving to Banbury to bring out Cassie Hemming. He confirmed what had been reported to me, and made some remarks on the conduct of the friends. The girl was shortly afterwards confined at a lying-in hospital connected with the home, and died a few days afterwards, a day or two before Canon Payne’s own death. When I called on the old woman again she was in a great state of mind, and said that Canon Payne had “gone to meet a just judge” and that he and the Norisses had killed her grandchild. Of course I told her it was wrong to talk in that way, that the girl went of her own earnest wish – that she had every kindness and attention shewn her, and that she might have died if she had been at Sibford or at Swalcliffe. But the old woman would not be persuaded. She would have it that if the girl had been with her she would have made her comfortable, and she would have been alive now.