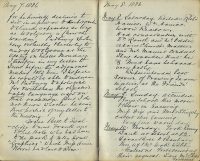 Took Penny Bank at School at 12. Drove Bell to Banbury this afternoon , took Webb. Called at Fortescue’s at their request. Saw Mr Charles Fortescue about Mann and Inns. He had not yet written to them, having been away from home last week. I instructed him to write to them and demand a retraction and apology or a denial that they imputed any dishonourable conduct in connexion with Church accounts to me and my churchwarden.

Called on Mr Smith of Tadmarton Rectory and offred to take him to Ruri-decanal Chapter at Cropredy on Wednesday next.