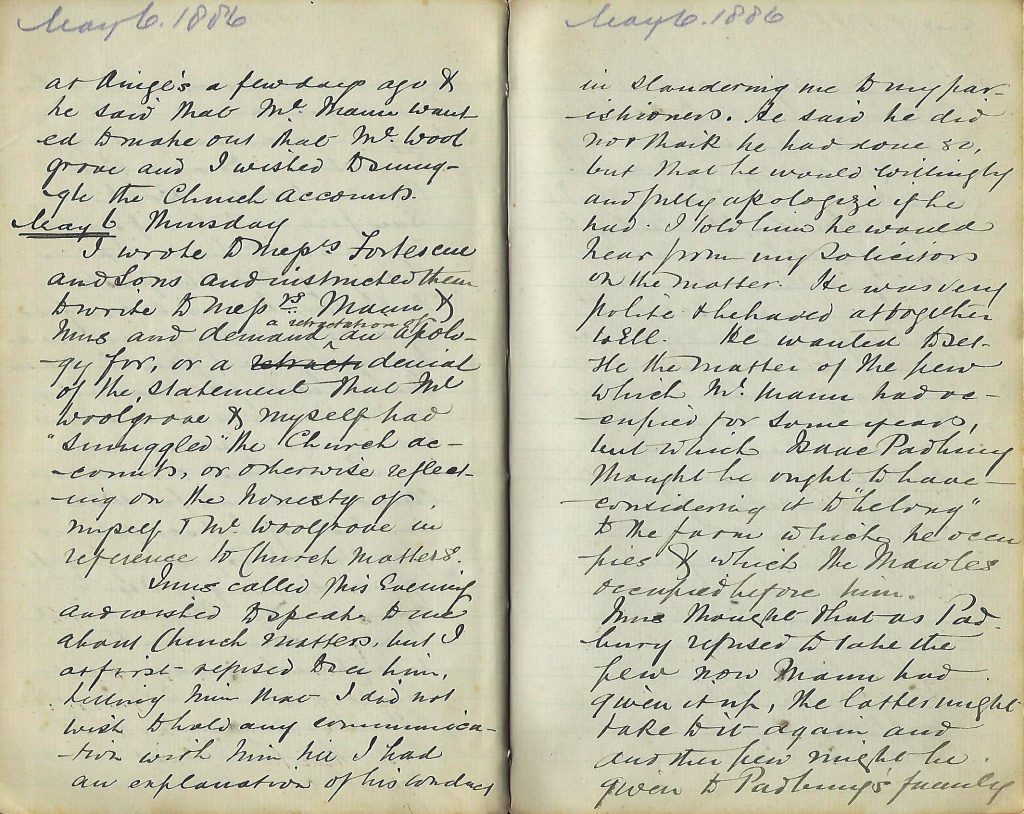 I wrote to Messrs Fortescue and Sons and instructed them to write to Messrs Mann and Inns and demand a retractation of, an apology for, or a denial of the statement that Mr Woolgrove and myself had “smuggled” the Church accounts, or otherwise reflecting on the honesty of myself and Mr Woolgrove in reference to Church matters.

Inns called this evening and wished to speak to me about Church matters, but I at first refused to see him, telling him that I did not wish to hold any communication with him till I had an explanation of his conduct in slandering me to my parishioners. He said he did not think he had done so, but that he would willingly and fully apologize if he had. I told him he would hear from my solicitors on the matter. He was very polite and behaved altogether well. He wanted to settle the matter of the pew which Mr Mann had occupied for some years, but which Isaac Padbury thought he ought to have – considering it to “belong” to the farm which he occupies and which the Mawles occupied before him.

Inns thought that as Padbury refused to take the pew now Mann had give it up, the latter might take to it again and another pew might be given to Padbury’s family for he himself declines to sit in a pew or subscribe to church expenses so long as Woolgrove is Churchwarden. Padbury spoke very violently and bitterly to and of Woolgrove at the Vestry on Easter Monday. I therefore in my letter to Inns before the adjourned meeting told him I hoped he would be able to induce Mr Padbury to apologise for and withdraw the objectionable language used on that occasion. But I do not know whether he read that portion of my letter to the meeting.

Drove Bell to Swalcliffe to meet Frank and Ethel Hole who had been to the park to take some “Graphics” which Miss Annie Norris had lent to Rosa.