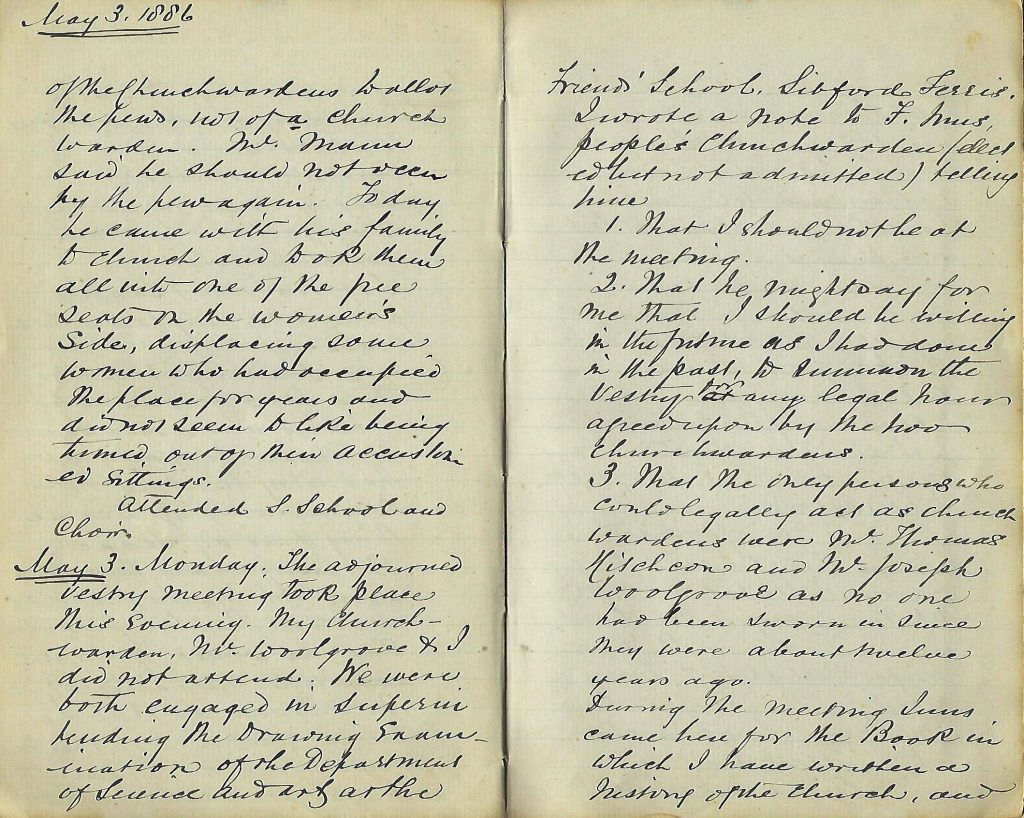 The adjourned Vestry Meeting took place this evening. My churchwarden, Mr Woolgrove and I did not attend. We were both engaged in superintending the Drawing Examination of the Department of Science and Art at the Friends’ School, Sibford Ferris. I wrote a note to F. Inns, people’s churchwarden (elected but not admitted) telling him

During the meeting Inns came here for the Book in which I have written a history of the church, and copies of accounts. But I had intentionally placed it under lock and key, so Mrs Stevens told him I was not at home.

I afterwards told Inns I should have declined to let him have it if I had been at home, as no one had ever written in it except myself and I did not intend that anyone should; but that I was quite willing to enter anything he wished if it coincided  with my views as to what was proper to be entered.

Miss Dix afterwards told me that she and Mrs Hiorns attended the meeting. Mr Mann was in the chair, Isaac Padbury, R.Austin, Joseph Pettipher, F. Inns, Gaydon (senior) and some others. Mr Mann said something to the effect that Mr Woolgrove and myself wanted to smuggle the Church accounts and that was why he wanted an evening Vestry.

The School children were having their annual May garland tea etc for which they collected £1.17.11 on Saturday last. Of course they were in and out of the room all the time of the meeting as neither teachers nor children sympathized with it. Mr Mann and his party were so disturbed that they adjourned to Fred Inns’s house. They had touted for sympathizers and had got Joseph Alcock and Joshua Holtom, Methodist Radicals who never come to church at all and George Spicer who very rarely comes. They are all unionist labourers and strong Radicals. Whilst at the Schoolroom Miss Dix thought Joseph Pettipher (who has never paid anything towards Church expenses for over 12 years) was about to propose Mr Mann as Churchwarden. So in order to prevent that she proposed F. Inns which Mrs Hiorns seconded, and so he was elected.

This morning I attended Archdeacon Palmer’s visitation at Banbury Parish Church. His charge was a paper relating to Church reform. I drove Mr White in to the visitation and brought him out. I lunched with Archdeacon etc at Red Lion. Got home at about 6pm.

I hardly know what you will think of our doings tonight and if it displeases you I shall be very sorry – but seeing Joe Alcock, G. Spicer, Holtom and other dissenters there I feared something disastrous might be proposed and when Mr Mann (who was in the chair and had audited the Church accounts) asked someone to propose a Churchwarden I named Mr Inns lest we should have a worse and it was carried. You will hear that the meeting was adjourned to his house on account of the arrival of the school children but nothing further of consequence was done.