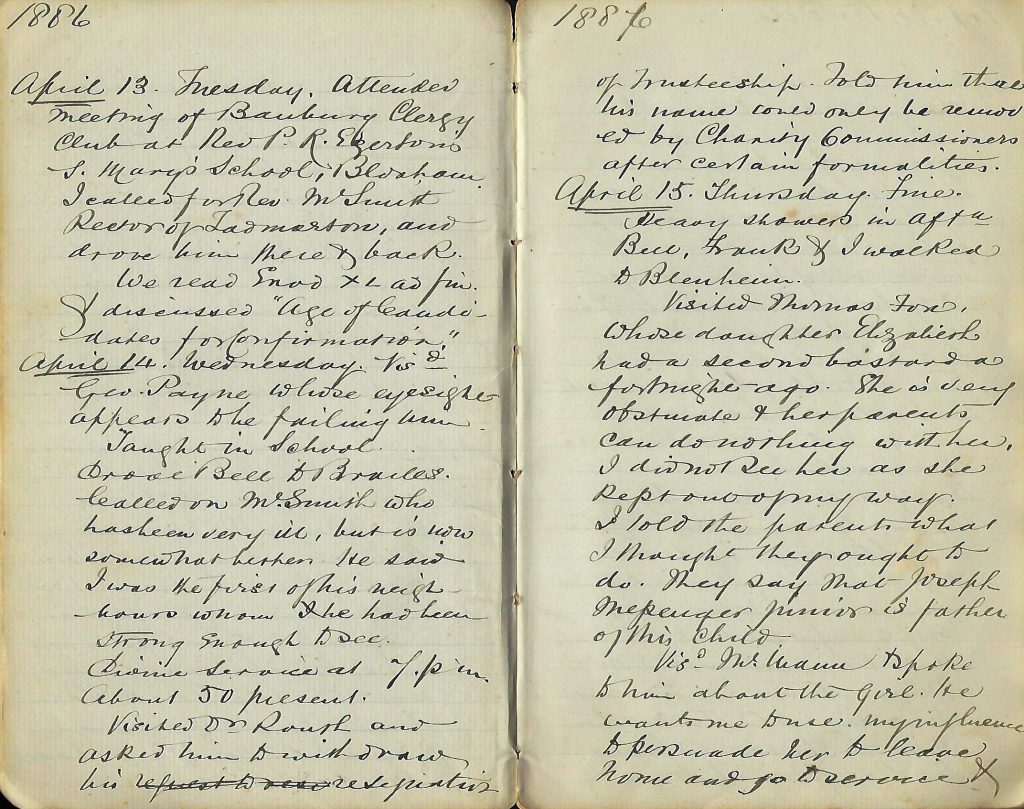 Fine. Heavy showers in afternoon. Bell, Frank and I walked to Blenheim.

Visited Thomas Fox, whose daughter Elizabeth had a second bastard a fortnight ago. She is very obstinate and her parents can do nothing with her. I did not see her as she kept out of my way. I told the parents what I thought they ought to do. They say that Joseph Messenger junior is father of this child.

Visited Mr Mann and spoke to him about the girl. He wants me to use my influence to persuade her to leave home and go to service and to say that if she does not he will have to turn her father and mother out of the cottage for he will not have her there. He suggested that I should tell the father he would have to be turned out if he did not get rid of her. I said that she was so obstinate that probably if the father did turn her out of the house with her bastards she would not go into the workhouse but would lie under a hedge all night or hang about the house until the old folk would be driven to let her in. It would be premature to take any steps at present as the child is not weaned. I told Mr Mann that I had some time ago told the mother that if she would bring the daughter up to me and if she would assure me that she was sorry for her past misconduct and desired to amend I would do all I could to get her a situation; but that they had not been to me.

Visited Adams junior who lives in cottage nearest to Mr Mann’s house – I saw his wife. They have six children including twins, and all under 8 apparently.

The lightning on Sunday afternoon last struck an elm tree near the “Pig & Whistle”. William Webb’s wife went outside to cover up some plants in her garden and received a slight shock which “benumbed” her for a time.

Thomas Adkins called and asked me whether he might have an allotment which William Golder wished to give up. I said that he might have it.