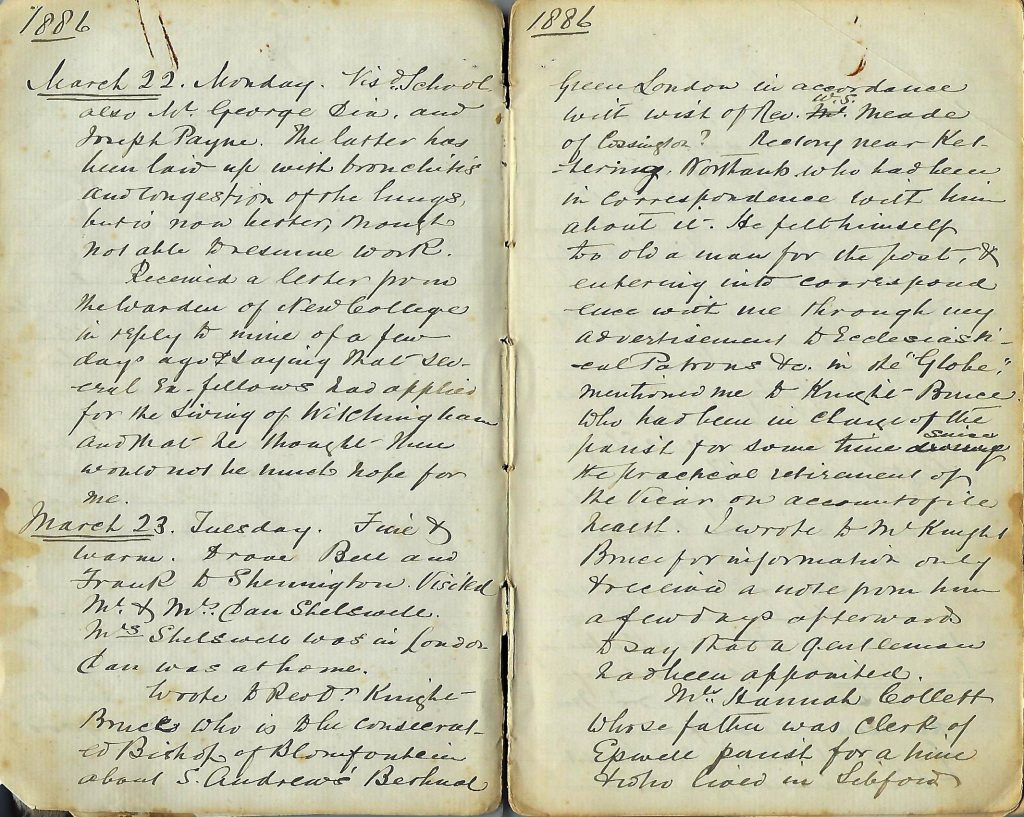 Fine and warm. Drove Bell and Frank to Shenington. Visited Mr and Mrs Dan Shelswell. Mrs Shelswell was in London. Dan was at home.

Wrote to Rev Dr Knight-Bruce  who is the consecrated Bishop of Blomfontein about S. Andrew’s Bethnal Green London in accordance with wish of Rev W. S. Meade of Cossington? Rectory near Kettering, Northants who had been in correspondence with him about it. He felt himself too old a man for the post, and entering into correspondence with me through my advertisement to Ecclesiastical Patrons etc in the “Globe”, mentioned me to Knight-Bruce who had been in charge of the parish for some time since the practical retirement of the Vicar on account of ill health. I wrote to Mr Knight-Bruce for information only and received a note from him a few days afterwards to say that a gentleman had been appointed.

Mrs Hannah Collett whose father was Clerk of Epwell parish for a time and who lived in Sibford Gower for a short period in her girlhood, but has been married for many years called for a Certificate of Burial of Elizabeth Gilkes of this parish, who was aunt to her husband. He is bailiff at Cold Harbour farm, Mixbury near Brackley, and is, according to his wife’s account, lawful heir to property of the value of some £80,000 left by the husband of Mrs Elizabeth Gilkes. She wanted his burial certificate, but I had to refer her to Swalcliffe for it, as he died before Sibford Church was built. She promised to let me know if they got the money.