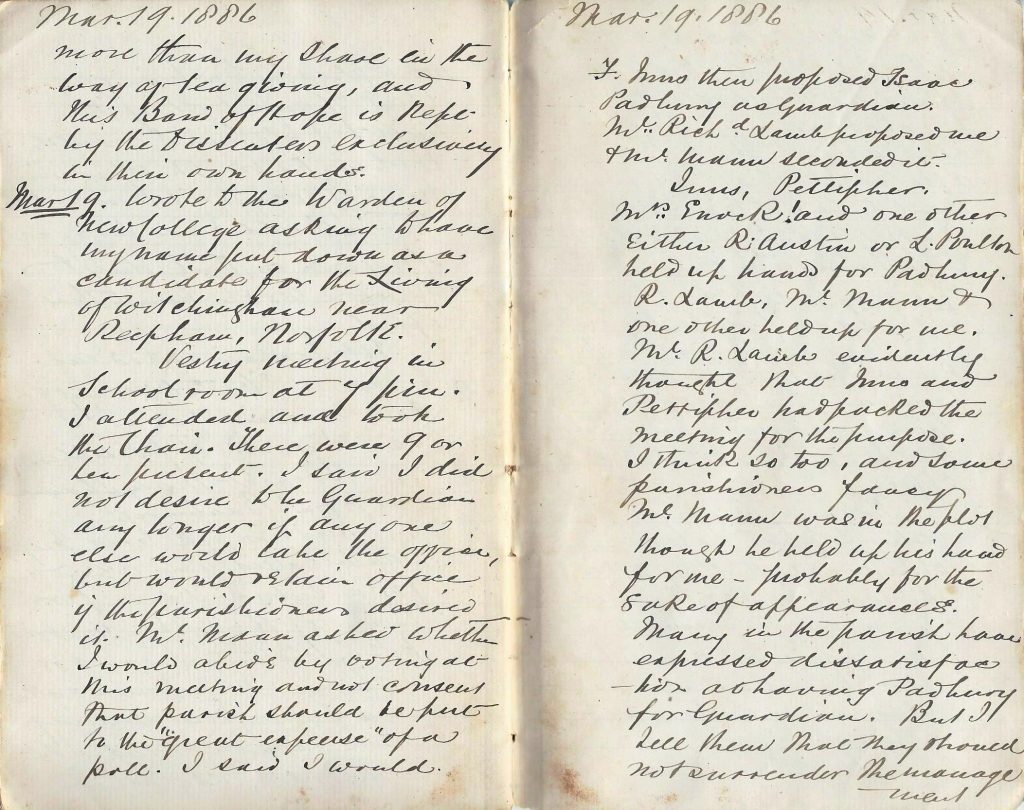 Wrote to the Warden of New College asking to have my name put down as a candidate for the Living of Witchingham, near Reepham, Norfolk.

Vestry meeting in Schoolroom at 7 pm. I attended and took the Chair. There were 9 or ten present. I said I did not desire to be Guardian any longer if anyone else would like to take the office, but would retain office if the parishioners desired it. Mr Mann asked whether I would abide by voting at this meeting and not consent that parish should be put to the “great expense” of a poll. I said I would. F. Inns then proposed Isaac Padbury as Guardian. Mr Richard Lamb proposed me and Mr Mann seconded it.

Inns, Pettipher, Mrs Enock and one other either R. Austin or L. Poulton held up hands for Padbury. R. Lamb, Mr Mann and one other held up for me. Mr R. Lamb evidently thought that Inns and Pettipher had packed the meeting for the purpose. I think so too, and some parishioners fancy Mr Mann wa in the plot though he held up his hand for me – probably for the sake of appearances.

Many in the parish have expressed dissatisfaction at having Padbury for Guardian. But I tell them that they should nit surrender the management of parish affairs to a clique as they really do, by not attending the meetings. Mr Woolgrove was accidentally absent. He told me afterwards that Mr Mann went to the Sibford Ferris Vestry Meeting and attempted to turn him out of his office of Waywarden and took some supporters with him, but Richard Lamb knew what was in the wind and had got people there to outvote him, so that Woolgrove retains his office.

Padbury promised at our Vestry to pack the lower end of the pond with clay to keep the water in. Arthur Lamb promised to scum it when needful and Mr Mann promised to see that it was cleaned out when necessary.